Patrick’s Pet Care provides the highest level of care to all pets by creating an experience rooted in a genuine love of animals, a commitment to do the right thing, and a comprehensive, personal approach to meeting the needs of all the living creatures and people who depend on us. 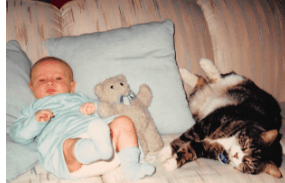 Patrick’s Pet Care founder, Patrick Flynn, has been an animal lover since before he could walk. He grew up in a household known for taking in unwanted pets and providing a safe, loving home for them. There was rarely a time growing up when Patrick’s house didn’t have an extra animal (or five). Often the visitors were dogs and cats, but there were also appearances by other species like birds, hamsters, fish, snakes, and once a very large snapping turtle. Patrick’s family even took care of horses a few times – but they didn’t stay with them! Not all of the animals that Patrick’s family cared for were cute, cuddly and well behaved. Some had been abused, some had been taught bad habits, and some were just mean. But over the years Patrick learned that if you provide consistently humane treatment and really communicate with the animal, even the most frustrating cases will cooperate. One of Patrick’s very first memories is sitting on the screened-in front porch with his mom at his childhood home, surrounded by a sea of newspaper and a litter of German Shepherd puppies who had been left in a box on the side of the road. The puppies were nursed until healthy and then, when old enough, neutered, spayed, house trained and given away to loving homes- except the runt of the litter who joined Patrick’s family and was named “Wooly Bear.” After graduating from Georgetown University, Patrick felt obligated to follow a “traditional” career path, but growing up, going away to college, and starting a professional life in Washington left him missing a life full of animals. Once he realized he could have a career in animal care, that obligation faded away. One night in January 2012, Patrick mentioned his plan to start a dog walking business to a friend, a cartoon artist. Before the end of dinner she had sketched a logo for the new venture. Patrick’s Pet Care formally began in March 2012 in the Columbia Heights neighborhood of Washington, DC. Patrick put up a Facebook post with the new logo offering dog walking services to his friends, knowing they would trust him and his animal expertise.

In less than a year Patrick was walking dogs seven days a week as one friend after another asked Patrick for his services. Eventually he simply couldn’t take on any more responsibility and in May 2013 Patrick’s Pet Care hired its first employee, Sam. In the following few years, Patrick focused on providing the very best care for pets, the best service for customers, and the best place to work for his staff. By May of 2015 Patrick’s pet care had grown to a staff of ten, serving more than 125 homes per day across the District. 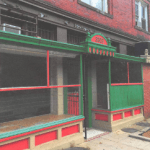 In April 2016 Patrick’s Pet Care opened a dog day care just down the street from where it first started in Columbia Heights.

Today, Patrick’s Pet Care continues to grow every day with dog walking, boarding, transportation, and training services for clients not just in Columbia
Heights but all over the District of Columbia, with plans to expand into Virginia and Maryland. As the company continues to grow it remains committed to serving clients and pets with special needs–the aged, the infirm and the just plain cranky–inspired by where it all began.

Patrick’s Pet Care is pleased to service the following neighborhoods:

The blue area represents our primary pet sitting service area. The red area represents our extended service area which can be covered, but not without 72 hours notice and inclusive of a $5.00/visit surcharge. Requests for service outside these red and blue areas will be considered, but for an extended service area fee between $10 and $15 per visit. Patrick’s Pet Care only provides pet sitting services in the District of Columbia.

This optional fee is to expedite the review of your application for a grooming appointment within two (2) business days and to accelerate the scheduling of your first appointment within one (1) week, and depends on the accuracy of the information you have provided about your pet. If we are not able to service your dog due to the inaccuracy of the information provided in the application, this fee will not be refunded.