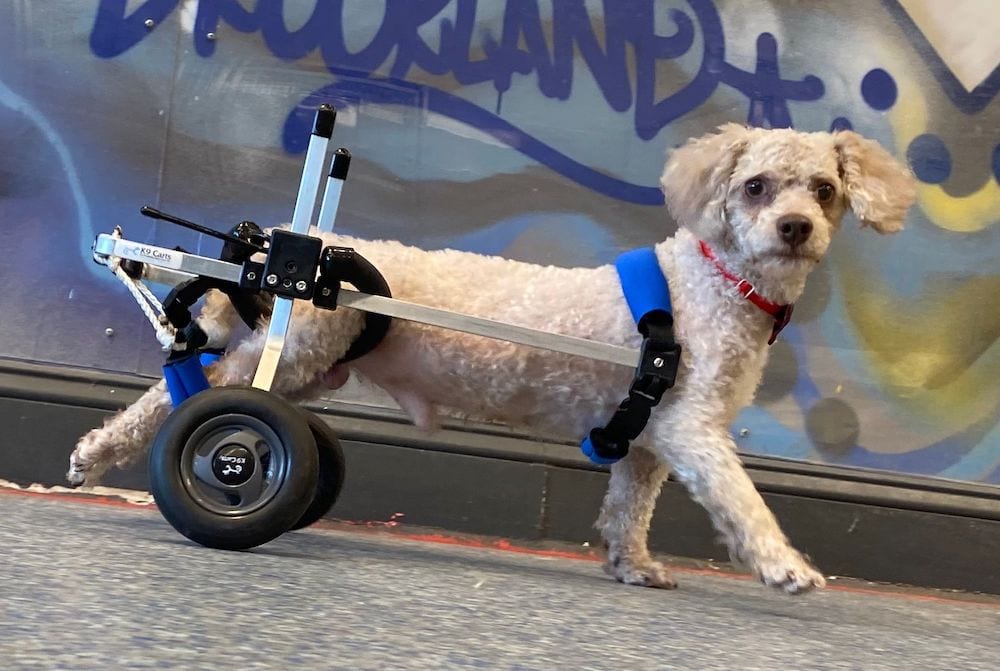 When Duke, a miniature poodle, came to Patrick’s Pet Care early this year for routine grooming, he had already been turned away from countless groomers in the DMV. His owners, Fiorella and Ryan, had called dozens of dog grooming services to no avail and were sent away from the few appointments they had managed to book. You see, Duke is no ordinary dog—he’s a dog in a wheelchair.

Duke fell into Fiorella and Ryan’s life this past November after his previous owners were unable to care for him. The puppy was malnourished and had started to show signs of severe pain in his spine and back legs. Despite medications for pain and inflammation, Duke’s condition worsened, eventually rendering him unable to walk or use the bathroom on his own.

“We nourished [Duke] back to health and encountered incredible people that wanted to help [him] get better,” says Fiorella. “He got his wheelchair, wellness checks, vaccines, neurology consults, and even an MRI to find out about his paraplegia.”

While Fiorella and Ryan were making Duke’s medical appointments, they also started their search for a groomer who could keep Duke looking his best, while working with his disability. “We called and called many groomers in the DC area and nobody was able to groom a dog with paraplegia,” says Fiorella.

Finally, the couple found a groomer who agreed to take him. They waited two weeks for their appointment and drove 45 minutes into DC from their home in Virginia. “We even cut some of his matted hair so he wouldn’t be too much of a challenge,” says Fiorella. When they arrived at the facility, the staff informed Fiorella and Ryan that they didn’t feel comfortable grooming Duke, and gave them the phone number to a different groomer. Trying to remain positive, they called the new groomer, who again explained that they didn’t feel comfortable grooming a dog in a wheelchair, but said they could try a consultation in 2 weeks. “That was unacceptable,” says Fiorella. “We wanted the reassurance that our dog was going to be treated very carefully, lovingly, and professionally like any other dog.”

“Duke has experienced enough hardship in his short life, so we needed a groomer who would take excellent care of our dog. A groomer with plenty of experience who [is] up to the challenge of grooming a paraplegic dog without traumatizing him,” says Fiorella. Luckily, the couple discovered Patrick’s Pet Care shortly after.

“[Our visit to Patrick’s Pet Care] was an incredible experience for us and our dog,” says Fiorella. “Patrick himself took 30 minutes to talk with us about Duke’s disability, Duke’s past, and helped us come up with realistic goals for Duke’s first grooming appointment.”

“I felt that these wonderful people had already done so much to provide a loving home for a dog with special needs, and that it was the least I could do to at least try to give the dog a haircut,” explains Patrick Flynn. “After I spoke with them, it was clear that they really cared and that if you just listened, the nature of the disability did not seem like it was something we couldn’t adapt our fear-free grooming practice to overcome.”

During the grooming process, Patrick and his staff took breaks to allow Duke to rest whenever he became anxious or stressed. His first session took several hours.

“Duke returned home happy like he was coming back from a walk,” says Fiorella. “He definitely didn’t show any signs of being traumatized. He actually spent the rest of the day as if nothing out of the ordinary had happened.”

“Patrick was honest with us from the beginning about what he could accomplish when we told him about Duke’s disability. When the grooming appointment finished, he sent us a detailed report of Duke’s condition, including photos of before and after, and even the types of treats Duke liked,” she says.

“We are so happy with how Duke looked and seemed after his appointment,” says Fiorella. “When he returned he was still the same happy puppy as when he left that day in the morning.” Fiorella and Ryan plan to continue using Patrick’s Pet Care in the future. And Patrick’s Pet Care’s staff look forward to Duke’s return!

Patrick’s Pet Care is the only fear free certified grooming salon in Washington, DC. The Fear Free Groomer Certification Program enables us to use Fear Free concepts to ensure that the grooming experience is as enjoyable as possible for every pet, every time. Learn more about the Fear-Free Grooming Experience.

COVID-19 Operations Update
We made important changes to our services and the way that we provide them: Read More

This optional fee is to expedite the review of your application for a grooming appointment within two (2) business days and to accelerate the scheduling of your first appointment within one (1) week, and depends on the accuracy of the information you have provided about your pet. If we are not able to service your dog due to the inaccuracy of the information provided in the application, this fee will not be refunded.